Established in 2008, the JWPT is a 5 man patrol team of rangers, who work in conjunction with Kenya Wildlife Service. They mainly patrol around the northeastern edge of Mt Kenya but are often called upon to secure other regions of the mountain when intelligence is sent to the Senior Warden. Their important work is evident from the snares they have destroyed and the individuals they have arrested and charged in the court. For instance, from January 2016 to September 2017, the team has destroyed over 400 snares, almost 40 charcoal kilns, confiscated 26 bags of charcoal, 434 fence posts and almost 1,500 timber pieces. They found almost 220 tree stumps and 24 additional logging sites. The team arrested 45 people for illegal activities including logging, marijuana farming and bushmeat poaching. The work of the team is not only limited to patrols but also community education and engagement with the public living along the forest boundary, in dealing with problem animals and also educating the community groups on the best forest conservation practices. The team members attend court to testify on cases for the forest offenders they arrest and attend legal and magistrate training. 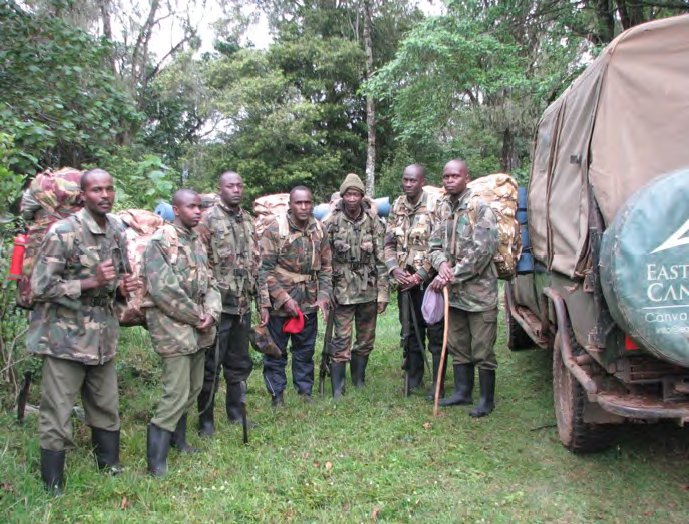 Logging found within the National Reserve

The team patrols deep into the thick rainforest of the eastern edge of Mount Kenya. The map shows the different illegal incidents recorded by the team for the first 6 months of the year (January to June 17). Data was collected by the Spatial Monitoring and Reporting Tool (SMART) provided by the Zoological Society of London.

The team has not had permanent housing since its establishment, living in makeshift tents with a small covered wooden kitchen, but this never became a reason for the members not to put more effort in their work.

Improvement for the teams housing has become possible this year with several donors coming to the table.

Kenya Forest Service gave an old house that was moved and renovated to be used as teams cooking place and a mess.

The Thin Green Line donated towards the building construction, solar and equipment inside the base.

Bunson Travel, in collaboration with Cookswell Jikos, donated a double stove jiko for the team’s kitchen.